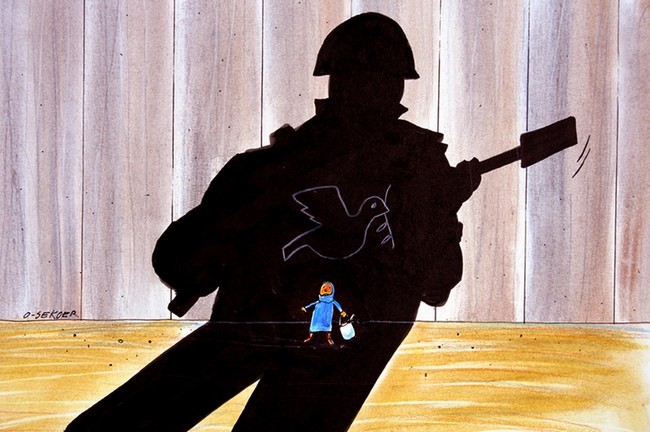 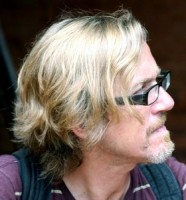 O-SEKOER is the artistic name under which – because of his excellent creative work – he deservedly became famous throughout the world. It is a phonetic transcription of the French word “Au Secours”, which means “Help”.
.
Today we can say that this name is really extremely apposite – this author and human being provides help in many ways – not only through his excellent creative work that brings us laughter and reflection; not only by teaching young adepts skills of visual arts and world view; but he does not hesitate also being directly involved in helping the weakest and poorest. He is therefore no academic observer nor false moralizer enclosed in his virtual world, he saw through his own eyes and tasted on his own skin the life of the poorest in this world. He is not just observing life from afar, but he is directly in the flow. And he has the courage to name the phenomena which are a disgrace to this world.
.
Thanks to his revelatory handwriting and experimental investigation of the effective forms of artistic expression and of course thanks to the depth of the content of his artworks he has achieved extraordinary success in major international competitions around the world and has become one of the most successful contemporary cartoonists.
.

Luc Descheemaeker – well known under his artistic name O-SEKOER – was born on 2nd October 1955 in the little village Kuurne in Belgium. He grew up in Bavikhove and began drawing very early. Currently, he is teaching Art and Media in the Institute of Saint-Joseph in Torhout.

As regards his creative work he is concentrated mainly on making cartoons and humorphotographs. Luc Descheemaeker does not publish in newspapers or weeklies, nor does he do political cartoons. He draws mainly for international cartoon festivals and annually submits his work to some 30 major exhibitions worldwide. During his career of more than 35 years, he is able to present a large List of Achievements – his artworks were awarded about 190 prestigious international prizes from the most widely differing festivals as far as Japan, Bulgaria, Brazil, Iran, Turkey, South Korea, Cuba, Spain, …

He published several his own cartoon books „Hersenschimmen“ in 1983, „De Katte Loog“ (The Cat Lye) in 1988 and „O-SEKOER cartoons“ in 1998 (the book was published on the occasion of the “100 O-Sekoer Cartoon Awards” exhibition in his honour).

He is a master also in humor photo of a rare quality, for which he received several awards including the Golden Lens, the first prize at the Knokke-Heist International Photo Festival and the Golden Tulip. In 1990, in recognition of his merits, Luc Descheemaeker was awarded the ‘Mejor Trezo’ – Best Pen Stroke prize in Colombia.

Renowned Spanish journalist Francisco Punal Suarez wrote about O-SEKOER‘s artworks: „With the photos, the viewer hesitates between reality and staging. Made with great care, which feature films, the result is unquestionable, and they look like cartoons photographed. In most of them there is a touch surreal. With his photos, the artist achieves a subtle balance between content and form, highlighting the conflicting emotions of being human, and exerts social criticism“.

As says about his creative work the artist himself: „The message of my humorous photographsis direct. The public should look in the mirror of life. To realize them I have the support of friends and family. My mood looking want people smile and exercise your mind.“ O-SEKOER toys around with socially critical themes and draws modern-day man in all his trivial and more soul searching depths.

Luc Descheemaeker has also founded an amateur puppet theater in Torhout – in which he acts as a director and scenographer. Since 2000 active volunteer and founder of ‘Banglabar’i, a Flemish fundraising project to help the poor people in Bangladesh. He participates in the activities of the NGO Damien Foundation in Bangladesh, in the construction of a hospital for lepers and tuberculosis.

We invite you to explore the great representative exhibition of cartoons and humour photographs by outstanding artist Luc Descheemaeker (O-SEKOER) from Belgium. You will have unique ocasion to get acquainted with the creative work of one of the most successful of contemporary cartoonists. Wishing you a wonderful experience!