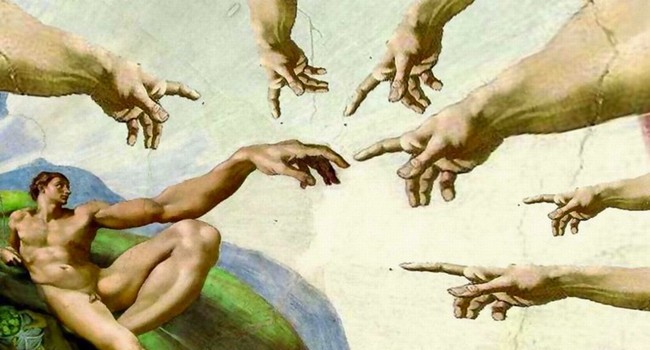 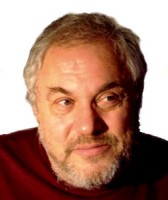 In the windows are blinking coloured eyes of computer screens which connect us via billions of invisible Ariadne’s threads that promise to lead us out from the labyrinths of our worlds. Indeed, a lot has changed since the days when the modern technologies entered into our lives. Today, many of us are not able to imagine our life “without them”. The same situation is in the field of art and of course cartooning. Creators more and more discover the huge opportunities of computer graphics and are experimenting with its use in their creative work. Many of us have succumbed to its charms completely.

This is a good time to remember the pioneers who first learned about the world of computer arts, while the rest of us with astonishment and respect just from afar observed these “miracles”. Probably one of the first artists in our cultural space, who started experimentally create artworks on the computer was significant Hungarian cartoonist Geza Halasz. Let’s say a few words about his life and artistic career.

Geza Halasz was born in 1947 in Szolnok, Hungary. He graduated at the University of Economics in Budapest in 1971. In 1978 he obtained Doctor’s degree. He is working as Economist, web-graphic artist, satirical fine artist and cartoonist.

His first drawings appeared in the “Economist” (Kozgazdasz) Hungarian university paper in 1968. After studying at the Department of Computer Science unsuccessfully tried teach his pocket calculator to drawing, but later with personal computers reached more success. Maybe he was one of the first cartoonists in the world who used computer in drawing cartoons. In 1986, the Montreal cartoon contest has been involved with computer drawing, and he won his first international prize in 1988 with computer cartoon. He is interested in experimenting with gif-animations and panoramic photos as well.

For 15 years he was head of the “Aula University Press” and cover designer as well. In 1999 began with creation of “Retouched History of Art” series, in which he montages well-known, famous paintings on computer. A series of individual pieces won several awards.

Ten years ago the “Weekend Magazine” of “Hungarian Nation” daily newspaper invited him to make an own heading. Since then the “Halasz Geza Show” can be found every Saturday in the Magazine. This year – and several times before – he was elected as a chairman of the Department of Cartoonists of the Association of Hungarian Journalists. He organizes a blog for cartoonists, and every year an exhibition and catalog of the year’s best works of cartoonists. In 2011 was this group voted by secret ballot at the cartoonist’s profession award. Geza Halasz is a member of the Contemporary Caricature and Satire Art Group, (KOKSZ), section of the Association of Hungarian Fine and Applied Arts Artists. With this group exhibition he reached Sofia, Rome, Vienna and Stuttgart.

Artworks by Geza Halasz were awarded at international cartoon competitions (we can mention at least 1st prize at Giantposter exhibition Budapest, Hungary in 2006, 2nd prize at World Press Cartoon Sintra, Portugal in 2009, special prize at Biennale Internazionale dell’umorismo nell’arte, Tolentino, Italy in 2009). He was also awarded The prize of Hungarian cartoonist profession in 2011.

Geza Halasz often exhibits his works in Budapest, and other towns in Hungary. He never gives to his works a title or caption, he leaves the viewer to see how far they reach with the deciphering of the abstraction levels. Instead of a forced feeding of the audience with gags, the satirical reflection usually characterizes him, and – because in manual graphic (as he himself modestly says) he is not very strong – he prefers specific computer solutions.

He is living and working in Dunakeszi, Hungary.

Let’s have a look together to a representative collection of artworks by important Hungarian cartoonist Geza Halasz. From the screen will friendly flash upon us a message which Geza Halasz through his artworks sent to us.