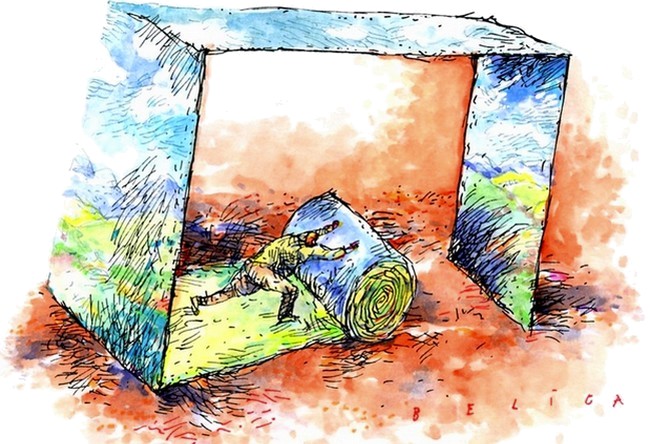 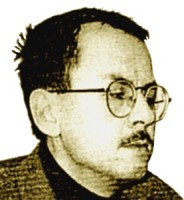 Ladislav Belica was born on 12th November 1959 in Prostejov, in today’s Czech Republic. He graduated from the High Hotel School in Piestany, Slovakia. Then he worked as a waiter in Slovakia and Austria, and later as an accountant in a private catering company. Ladislav is intensely involved in drawing since his childhood, he began publishing after 1989, and since then his cartoons appeared in more than 20 Czech and Slovak periodicals. He is mainly concentrated to creation of cartoons and illustration – he illustrated several books. Ladislav Belica is a member of the Slovak Union of cartoonists. His works have been exhibited in numerous exhibitions at home and abroad. His artworks gained several significant national and international awards at various cartoon festivals. In 2007, in the competition of the Journalist’s Award he was awarded for outstanding contribution to the development of contemporary cartoons in Slovakia. A year later he won the prestigious Golden Gander award at the International festival of Humor and Satire Kremnica Gags. Ladislav Belica lives in Trencin, Slovakia.

When you say Laco Belica …

(from the memories of his fellow Peter Ulicny)

That remembrance is thirty-five years old, but still failed to moss in my head, nor the auntie Sclerosis managed bit me of it. It was a day of entrance exams for the High Hotel School in Piestany. We have just completed the first act – written test from mathematics. I am standing now in the hallway along with other “suffering” and enjoying a break until begins another – even though much smaller martyrdom – test from Slovak. Some people try to gauge stage fright by nervous swirling down the hall, others standing in groups are comparing their results of exams, another stare into papers and at the last minute try to cram into their heads something of the Slovak language. What actually wrote that Jan Holly and what the hell is the adverbial determination of the place? Only then I noticed that guy. He stood away from the others, almost at the end of the hallway, hunched over his workbook which was placed on a windowsill. He diligently wrote something into it. When I approached him, I realized that the guy doesn’t write, but he draws. And when I was about two steps away from him, I saw that the whole page of his workbook has been covered with small, filigree characters which resembled the running crew of legendary Yellow Submarine. On that sterile school hallway with fresh smelling linoleum and portrait of Gustav Husak acted that guy with his pictures as a revelation. In his position, facial expression and sovereign pencil strokes was passionate enthusiasm. At that moment, he was apparently just interested in how will end the story created by his own hands … and some entrance exams were at that moment indifferent to him. I immediately wanted to get to know him. Till today, I feel a little ashamed for the indiscretion I disturbed his circles. But I couldn’t do anything else. I approached him and began to pat him on the shoulder for his art creations and tattle something that at the admissions to the hotel school I really didn’t expect such a guy who will during a break “repeat” by his pencil instead of Slovak language the style making elements of pop art. “Hi, I’m Peter”, I introduced myself and offered him my hand. Only then he really rose his head from his workbook. Behind thick lenses of his eyeglasses looked at me thin lines of his eyes – at that moment it occurred to me that this way is squinting a man who doesn’t want to admit too much light from this world into his head. For the reason, that it needlessly didn’t irradiate nor make blind his own world. That one which he carries in his head. So, this way I met Laco Belica.

A week later I unsealed the envelope and read that they accepted me. I was happy, but I also really wished that the same message had in his mailbox also the guy who draws so nicely while listening to the Beatles. My wish was fulfilled. On the first September, when I came to the class among new classmates, I searched for that guy in glasses. Thank God he sat there. Impartially and spirit blankly, but he sat there. I didn’t know many people in my life who by their expression, movements, mimics or mere posture so apparently show the state of mental absence at the places where coincidentally – and sometimes also against their will – has appeared their body. Laco’s almost sleepwalking and narrowed eyes soon became his characteristic, something like his brand. Gym teacher right at the first lesson “liberated” him from the obligation to attend his physical training … He was so appalled by Laco’s “antiathletic” image and attitude. Maybe that he just realized that to this individual any rapid movements or chasing the ball might be not only strange, but even life-threatening.

At the moment I perhaps didn’t understand it, but now, in hindsight, I know that in the person of Laco I discovered one of the most important persons in my life. Soon we both understood that the school in which we found ourselves, would be suffering for us. Fatal mistake. Especially practical classes terrified us … world of hotel receptions, kitchens and restaurants somehow didn’t rhyme with “our” world. I don’t know what we actually have been awaiting from the school, but suddenly we feeled as stowaways on a train rushing 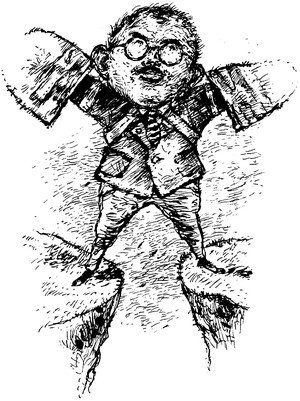 I would be glad if I could end up this text at this moment. Because it would have been at least a nice punch line. But then came the bad things. When one day he phoned me that he was diagnosed with multiple sclerosis, I was on the perplex. I really did not know what exactly the disease means, but that phrase sounded ominously. And that it is really nasty plague, I immediately learnt from the relevant literature. When I was at the beginning talking about Laco’s physical fragility, I have never been thinking that his fragile body hides so strong spirit. It must be hell to observe the progressive degradation of his own body (Laco is today bedridden and can move only his head). He never complained nor declined at the spirit. Until the last moment, until his right hand “functioned”, he drew and drew. When he found himself in the anthology of Slovak cartooning, laconically called “Twentyfive” in the company of our best cartoonists, I was perhaps more excited than he. I’ve always been convinced, that he belongs to them. Anyway, cartoonists don’t make this world happier and “bearable” only on paper. When I learned that years ago during Laco’s Bratislava hospitalization at the Kramare hospital his colleague – cartoonist Fero Jablonovsky brought to his bed “for a chat” Tomas Janovic (renowned Slovak writer), it chased me to tears. They had never met before. What meant this meeting for Laco, describes his own comment: “Oh man, that visit was more for me as if the Beatles came to see me.”

Dear Laco! The fate indulged us to be together only during those school years. I often regreted that we didn’t live in the same city – and I mostly feel sorry now, when my visits could distract you a little and transfer you for a moment to those early times that we spent together. I have never said it loudly to you, but in those years you were the most important person for me. You gave me the courage and taste to do what I love, regardless of the circumstances. Unfortunately, I am not able to help you in your illness. But if the words could treat a little, I have to say to you loudly something that I owe you. One huge THANK YOU! From a distance I am sending you a melody from “Strawberry Fields”, where we will meet again – FOREVER.

(from the book “Twenty-five”, written by Kornel Foldvari)

As a graduate of the hotel school Ladislav Belica (1959) apparently had no reason to cross paths to art. Of course, if his talent hasn’t brought confusion to everything. Thanks to it, he stands out in our cartooning as an unexpected solitaire. In Trencin seclusion he is quietly working on himself and on the form of his drawings, publishes, sends his works to competitions … He has gained spurs as an illustrator and despite publishing barren years (due to which didn’t came out an anthology of cartoons in which he was represented) he weaves other plans – perhaps debut of his comic book.

As a self-taught artist he doesn’t facilitate his work on drawings, he doesn’t resort to the classic “naive” tricks of artistically untrained cartoonists. Programmatically prefers professional technique and fights hardly with its tactics. He successfully develops the basics that many years ago, when he was a soldier in Prague provided to him regular contact with Oldrich Kulhanek (the author of today’s Czech banknotes) and his lessons on the basics of pen and ink drawing.

Ladislav Belica is not a superficial joker of shortbreath’s themes, and cheap, “funny” deformation. He is a civilian restrained; insightful observer who is looking rather below the surface, and notes the themes with a wider range. Neat and visually soothing drawings provide us space to think about the dangers in our psychological make-up or about small philosophical paradoxes around us. We can not definitely describe him as a warrior, but his natural sensitivity doesn’t allow him to rise academically above the misery of our surroundings. He records them in such a way that even without major complaining rhetorical exercises we can see in them particular relation and the possible culprit (which, paradoxically, may be at the same time a victim).

He doesn’t give us the recipe for a solution – he just unlocks our way to it. All this with a light touch of poetic nostalgia of someone who is beginning to realize the vanity of everything, but he doest resign and is still looking for attractive features in the face of increasingly grimmer world.

Cartoon Gallery expresses gratitude to personalities who participated in the preparation of this exhibition – namely to: Fero Jablonovsky who initiated the exhibition and provided complete materials for its preparation, Peter Ulicny and Kornel Foldvari who approached us in their texts personality of the exhibiting artist and primarily to the author of artworks – Ladislav Belica for his outstanding creative work which we now have the honor to present to European and world public. Thank you very much.