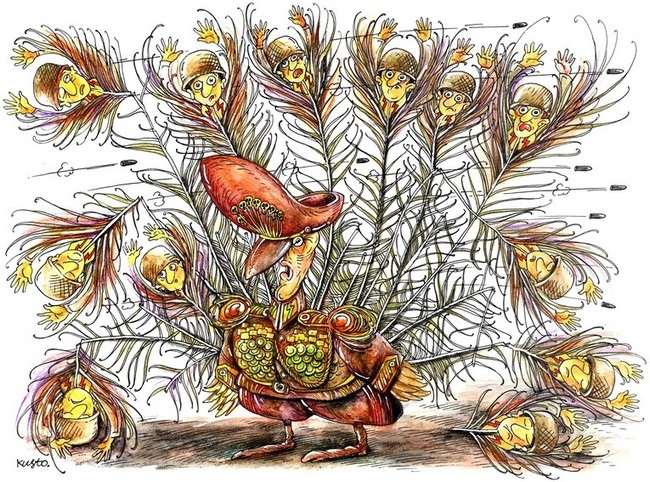 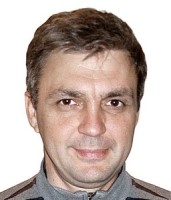 If we play a well-known game on associations of ideas, the first words that might come to our mind when hearing the name of the Ukrainian cartoonist Oleksiy Kustovsky could be: sensitivity, perceptiveness, empathy, precision, cleanliness.

Despite his original profession of a grower of fruits in the botanical garden, he very soon could not resist the voice of his heart and talent and moved to a completely different garden, to a garden of fine art delights, where under his skillful hands have ripened wonderful fruits of cartoon art. Inspite of his unprecedented success and the huge amount of laurels which he in a short time gained in international cartoon competitions all around the world, Oleksiy Kustovsky remained exceptionally modest man, without any signs of narcissism.

As the experts say a drawing is like a radiograph of personality of its author. The drawing by Oleksiy Kustovky is revealing us a man responsible and demanding to himself, who despite his great talent is willing constantly working on himself and still perfecting his extraordinary abilities. A man extremely perceptive and sensitive, able to see deeply beneath the surface of things. An artist with a strong graphical feeling and precise handwriting. His artistic talent highly exceeds above any mediocrity – his dominant discipline is a pen drawing, by minutely detailed technique refined almost to absolute perfection.

Of course, in the current historical reality of a very difficult period experienced by his country, he must react, and he is always ready to pronounce his clear position. A major part of his work of art, however, is not only focused on the ephemeral topicality, but he takes full advantage of his ability to creatively express common principles of existence of the world and man, and to unmistakably diagnose any transgressions against them. But he is certainly not a cheap moralist, he successfully avoids from giving ethical lessons to anyone. With grace and understanding he perceives everyday weaknesses of human beings, but he is uncompromising to any violence, vulgarity, weakness of character and heartlessness. Artworks by Oleksiy Kustovsky never lacks the poetry and strong idea with timeless validity. He is not only high quality artist, but also a philosopher, psychologist, and especially a poet of image.

Oleksiy Kustovsky is undoubtedly a dignified partner and successor of the great personalities of Ukrainian cartooning and he currently belongs to the brightest stars of the European Cartoonists’ scene.

Let us introduce you at least a brief professional biography of this exceptional artist:

Oleksiy Kustovsky was born on 11th March 1971 in Kyiv, Ukraine. He graduated at the National Agricultural University in Kyiv, Ukraine in 1993, specialization – agronomist. Then he started working as a fruit grower in M.M. Grishko Central Botanical Garden of the National Ukranian Academy of Sciences.

His first cartoon appeared in the newspaper „Vechernie Vesti“ (Kyiv) in 1998 and since that time his artworks have been published in newspapers and magazines in many countries (Ukraine, Russia, Turkey, Bulgaria, Sweden, The Nederlands, etc). Since 2004 Oleksiy Kustovsky works as an artist of parliamentary newspaper “Holos Ukrainy” concentrated mainly to creation of cartoons and illustration. He presented his artworks at several exhibitions at home and abroad. In 2010 he took part in the collective exhibition in Pisek (Czech Republic).

Since 2003 Oleksiy Kustovsky participates at a number of international cartoon competitions and up to now his artworks have been awarded 136 prizes (see below). He is often invited to be a member of Juries of international cartoon contests (2005 – “LM”, China; 2010 – „Clear look“ Russia; 2010, 2011, 2012 – „Jaka bede“, Poland; 2012- „Nasreddin Hodja“ Turkey; 2013 – Salon Romania). He is a member of the Association of Cartoonists of Ukraine and the National Union of Journalists of Ukraine.

Dear friends, we invite you to another interesting artistic excursion – this time we bring you an excellent collection of the creative work by the cartoonist Oleksiy Kustovsky from Ukraine. Pleasant experience!