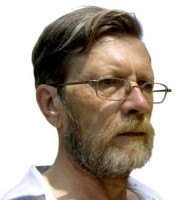 Arkadzi Hurski (also known as Arkadiy Nikolayevich Gurskiy) was born on 15th August 1954 in Shimanovsk in the Amur region (RSFSR) as the son of railwaymen. In 1976 he graduated from the Belarus Polytechnic Institute, Faculty of cars and tractors, specializing in “Combustion Engines”. He worked in the Minsk Tractor Factory, in the Factory for the production of motorcycles and bicycles and other companies and organizations. His first cartoon was published in the newspaper “Literature and Art” (Лiтература Мастацтва) in Minsk in 1980. Then he published in magazines “Krokodil”, “Ogonyok”, “Novoe Vremya”, “FIS”, and newspapers “Izvestia”, “Komsomolskaya Pravda”, “Literaturnaja Gazeta”, “Soviet Sport”, “Literaturnaja Rossia”, as well as in national newspapers “Vozhyk”, “Znamja junosti” and others. In addition to these periodicals, his drawings appeared in various newspapers and magazines in the countries of the former Soviet republics and former “Socialist bloc”. Arkadzi Hurski participated in many international cartoon exhibitions and competitions (we can mention few of them: Biennale of Gabrovo, Bulgaria, 1989; “Olense Kartoenale”, Belgium 1994, 1995; “Nasreddin Hodja”, Turkey, 1995; Knokke-Heist, Belgium, 1995; Eurohumor, Italy, 1996; “Satyricon”, Legnica, Poland, 1994.1996, 2002; Aydin Dogan, Turkey, 2006). At the competitive exhibition of cartoons “Adults and Children” in Moscow in 1989, he won the First Prize. In 1992, he issued an album of cartoons within the series “Vozhyk Library”. He illustrated with his drawings several books of novelists. He is also the author of patents in the field of cycling equipment. Arkadzi Hurski lives and works in Minsk Belarus.