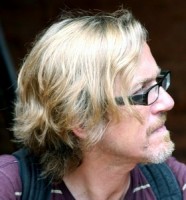 Luc Descheemaeker was born on 2nd October 1955 in Kuurne, Belgium. His pseudonym is O-SEKOER, which is phonetically transcribed French word “au-secours” and means “Help” in English. He grew up in Bavikhove and began drawing very early. Currently, he is teaching Art and Media in the Institute of Saint-Joseph in Torhout. As regards his creative work he is concentrated chiefly on making cartoons and humorphotographs. O-SEKOER doesn’t publish in newspapers or weeklies, nor does he do political cartoons. He draws mainly for international cartoon festivals and annually submits his work to some 30 major exhibitions worldwide. During his career of more than 2 decades, he has a large List of Achievements – his artworks were awarded about 150 prestigious international prizes from the most widely differing festivals (Japan, Bulgaria, Brazil, Iran, Turkey, South Korea, Cuba, Spain, …). He published several books ‘Hersenschimmen’ in 1983, ‘De Katte Loog’ (The Cat Lye) in 1988 and ‘O-SEKOER cartoons’ in 1998 (the book was published on the occasion of the “100 O-Sekoer Cartoon Awards” exhibition in his honour). He is a master also in humor photo, for which he received several awards including the Golden Lens at the Knokke-Heist International Photo Festival and the Golden Tulip. O-SEKOER was awarded the ‘Mejor Trezo’ – Best Pen Stroke prize in Colombia in 1990. His experimental graphic art style is an example of great artistic value. O-SEKOER is living in Torhout, Belgium.