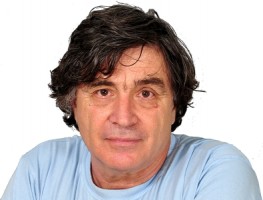 Jovcho Savov was born in 1946 in Sofia, Bulgaria. He graduated from the Institute of Architecture in Sofia, Вulgaria in 1973. He has worked as a designer for several major newspapers and magazines. The hundreds of his cartoons and illustrations have been published in periodicals, both in Bulgaria, and around the world. Artworks by Jovcho Savov have been honored with numerous prestigious awards in many countries of the world, e.g.: Bulgaria, Romania, Iran, Slovakia, Italy, Turkey, Japan, Korea, Croatia, Macedonia, Serbia, Russia, Ukraine, Argentina, Paraguay, China, Costa Rica, and others. We can mention at least some of them: 1974 – Grand Prix on the World Cartoon Gallery, under the title of “Stop” – Skopje, Macedonia; 1986 – First Prize on the National Cartoon Competition under the title of “Man and Automobile” – Sofia, Bulgaria; 2009 – First Prize on the International „Car-сaricaturе”exhibition – Zagreb, Croatia; 2010 – Grand Prix on the National Cartoon Exhibition for contributions to the development of the Bulgarian cartoon art – Cartoonist of the Year, Sofia, Bulgaria; 2012 – First Prize on the International Cartoon Contest “Rich man, poor man”, Braila, Romania; 2014 – The Excellence award of the Eighth International Cartoon Competition on “Saving, recycling and environmental damage”, Nantong, China; 2015 – The Honorable Mention of the International Cartoon Contest “Humour a Gallarate” on the theme of “The Global Market”, Italy; 2018 – Honourable Mention on the International Kaplanlar Refrigeration Cartoon Competition, Bursa, Turkey, theme “Environment and Climate Change”, etc. He presented his creative work at twelve solo cartoon exhibitions in Bulgaria and Russia, and at a great number of collective exhibitions arround the world. Jovcho Savov also created many works in the area of illustration, design, sculpture and architecture. He is living and working in Sofia, Bulgaria.