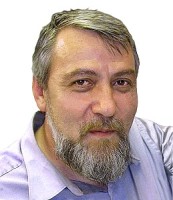 Valentin Georgiev was born on 18th May 1970 in Targovishte, Bulgaria. From 1984 to 1988 he studied at the Secondary Art school “N. Marinov” – Targovishte and from 1990 to 1995 at the Fine Arts Academy of Veliko Tarnovo “St. Cyril and Methodius”, from which he graduated as the major in Paintings, under assoc. prof. N. Rouschukliev. He is working as a freelance artist and is concentrated mainly to painting, cartooning and illustration. He has realized 17 solo exhibitions and participated in many group exhibitions in Bulgaria and abroad. Valentin Georgiev participated at numerous national and international cartoon competitions and his artworks were awarded about 100 prestigious prizes and mentions all around the world (let us mention at least sme of them: 2007- Grand Prix Blato, Croatia, 2008 – Grand Prix at Satyrycon Legnica, Poland, 2009 – FECO prize at the Netherlands Cartoon Festival, 2010 – First Prize Galarate, Italy, 2011 – Special prize at Gold Panda China, among many others). He has participated in numerous national and international exhibitions, festivals and creative workshops. Valentin Georgiev has organized 4 national and 7 international cartoon competitions and many cartoons exhibitions in his hometown of Ruse during 2009: “Together for Safety and Peace“; “Climate Change“ and in 2010: „Was denkt Bulgarien uber Deutschland?!! (Das Lachen der Volker in Bildern)“. He is often invited to be a member of juries of the cartoon contests worldwide (e.g. Bulgaria, Poland, Slovakia, Macedonia, Turkey, Azerbaijan, Iran, India, etc). Valentin Georgiev was named a cartoonist of the world for the year 2010. His artworks appeared in a number of newspapers and magazines at home and abroad. He is a member of the Union of Bulgarian Artists since 2010 and the President of the Association branch in Ruse, Bulgaria. Valentin Georgiev is living and working in Rousse, Bulgaria.