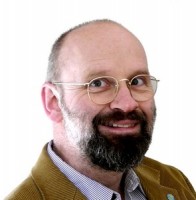 Rainer Ehrt was born on 13th August 1960 in Elbingerode, Germany. From 1983 to1988 he studied graphics and illustration at the University of Art and Design Halle. During the self-selected internship year as the typographical worker in Halle and Leipzig he laid the foundations for his future craft activity. Rainer Ehrt began working as a graphic designer, illustrator and poster designer for the Hans Otto Theater in Potsdam, the Progress Film distribution and various publishing houses in Berlin. At the same time he used the free graphics in the original graphical techniques, etching, silkscreen and woodcut. In 1993 he founded the Edition Ehrt for original graphic art bibliophile books. His cartoons and satirical drawings have been published by many newspapers and publishing houses (we can mention at least “Eulenspiegel”, “Nebelspalter” (Switzerland), “Sueddeutsche Zeitung”, “Frankfurter Allgemeine” and “Time”). Since 2000, he also deals with painting and wood sculpture. His artworks have been exhibited at numerous individual and collective exhibitions. Rainer Ehrt took part at international cartoon contests and his cartoons were awarded prestigious prizes and mentions (1998 – “Best political cartoon”, London Cartoon Competition, 2008 – Grand Prix World Press Cartoon Lisbon, 2010 – Grand Prix Satyricon Legnica, among many others). He published 13 original graphic artist’s books, the satirical “Prussian panopticon” in 2001 and “Mozart 2006”. He is also involved in numerous cartoon books and anthologies. Published by Rainer Ehrt the book “Global Krisencartoonismus” (2010) and “Prussian picture” (2011). Artworks of Rainer Ehrt are in permanent collections of many museums and galleries in Germany and abroad. He is living and working in Kleinmachnow near Berlin, Germany.