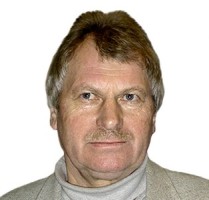 Vladimiras Beresniovas also known under his artistic name „Vlaber“ was born on 13th December 1948 in the village of Boronky in Belarus. He graduated from the Kaunas College of Applied Arts with a degree in Artistic design. He submitted some of his early drawings to a local newspaper and they were published immediately. Since 1971, he has exhibited his artistic and humoristic works in Lithuania, Latvia, Russia, Greece, Poland, Yugoslavia, Germany, Italy, Brazil, Romania, Cuba, The United States, Australia, Canada, Turkey, Brazil, and France. Vlaber has been active in the Lithuanian and world artistic communities for over 40 years. He has worked professionaly in the areas of book illustration, placard design, caricatures, and painting. In the last ten years Vlaber illustrated over 100 books. He published also his own books of cartoons and humor – “Vlaber Cartoons” (1998); “Geriau Ragas ant Kaktos” (2002); “Linksmoteka” (2008). In 2008 he has been named to Who’s Who in Lithuania. His cartoons frequently appear in Lithuanian newspapers „Lietuvos Rytas“ and „Kauno Diena“. His artworks have been awarded at many international cartoon competitions. Some of his exhibitions: Cultural Diversity – the European Wealth, Exhibiton of Eight European Artists, Gabrovo, Bulgaria (2008); Satyrykon International Exhibition, Legnica, Poland (2008); International Nasreddin Hodja Cartoon Contest (2007), Istanbul, Turkey (2007); International Humor Exhibition of Piracicaba, Brazil (2007). In 2008 great exhibiton of his artworks was organized in Vilnious to celebrate his 60th Anniversary. He is a member of the Lithuanian Artists’ Association, the Lithuanian Journalists’ Union, and the Lithuanian National Cartoonists’ Association „Humor Sapiens“. Vladimiras Beresniovas alias Vlaber is living and working in Kaunas, Lithuania.