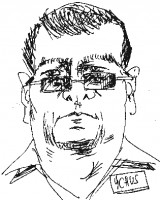 Jakub Suchy was born on 12th October 1966 in Bratislava, Slovakia. He graduated from the Gymnasium Vazovova. He also studied industrial design at the Faculty of Mechanical Engineering of the Technical University in Bratislava (1990). Since 1987 he has been participating in cartoon competitions in Slovakia, the Czech Republic, Turkey, Belgium, Croatia, Romania, Serbia, Italy and Spain. Among the results: he is the winner of the Grand Prix of the 3rd edition of the “Golden Keg” cartoon competition in Presov,Slovakia in 1997. He publishes in the Slovak periodical press from 1989 mainly in weeklies and bi-weeklies. Since 1989 he participates in collective exhibitions in Slovakia, the Czech Republic, Belgium and Greece. So far only one personal exhibition was in the Slovak Gas Museum of the SPP in Bratislava, 1999 under the curatorium of Dr. Janko Schuster. He illustrated several books. In his artwork across the board he pays attention mainly to the drawings without words, but in the 90s he also actively devoted himself to current political cartoons. He is a member of the Club of Bratislava Cartoonists (KBK). Jakub Suchy lives and works in Bratislava, Slovakia.