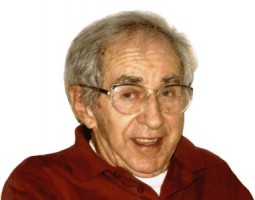 Jozef Schek was born on 3rd September 1921 in Bratislava as Jozef Babusek. At the end of the fifties he began to use the pseudonym Jozef Schek. He studied at the College of Agriculture in Bratislava and Brno, and later studied Art history at the Comenius University in Bratislava. He worked as a technical draftsman and later as an industrial designer. His first artwork was published at the early forties of the 20th century. Since 1959, he collaborated with humour magazine Rohac. His work is very extensive and varied – cartoons, comics, illustrations, typographic designs, graphic design of magazines, painting and graphics. He is rightly considered the founder of modern Slovak cartooning and comics. He published longest comic strip in the history of Slovakia “Jozinko, the child of his parents”, published in the journal Rohac entire 23 years. He wrote about thirty other comic series. In 2004 was published in the Czech Republic his extensive monograph, in 2006 in Slovakia selection of his cartoon creation and in 2010 book about his life and work. He lives and works in Piestany, Slovakia.