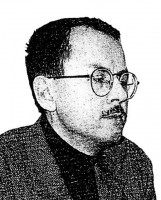 Ladislav Belica was born on 12th November 1959 in Presov. He studied at the High Hotel School in Piestany. He worked as a waiter in Slovakia and Austria and later as an accountant in private gastronomical company. He has intensively devoted to drawing since his early childhood, began to publish after 1989 and since then his cartoons have been published in more than 20 Slovak and Czech periodicals. He is especially concentraiting on cartooning and illustrations – he illustrated several books. He is a member of the Slovak Union of Cartoonists and his artworks were exhibited at many exhibitions at home and abroad. At cartoon competitions his works obtained several important domestic and foreign awards. He lives in Trencin, Slovak Republic.