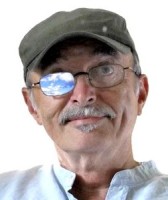 Juraj Cajchan was born on 19th November 1941 in Bratislava in the former Czechoslovakia. In 1964 he graduated from Architecture at the Academy of Fine Arts in Bratislava. In 1968 he moved with his family to Sweden, where he worked initially as an architect for several years. Since 1983 he has cooperated with the newspaper Goteborgs Posten, in which he during 31 years has published some 4,000 drawings – mostly cartoons or short series. Despite the fact that in Goteborg prevailed tradition of verbal humor Juraj Cajchan steadfastly focused on creating a “pure” cartoons, which has the ability to express the idea with pure visual means only, without the use of literary crutches. Gradually he also publishes short texts which he himself illustrates by a drawing or a photograph. The main aim of his work has been the daily press, where he in a small format and simple graphic form speaks to the reader. He presented his artworks at several exhibitions in Sweden, Belgium (Knokke-Heist) and other countries. At the competition in Fredrikstad he gained for his work a prestigious award. In 2009 he was awarded the Cultural Prize of Goteborg city. Besides cartoons he has also been involved playing petanque (boule) in which he became the champion of Sweden in double in 1991. Juraj Cajchan is living and working in Goteborg, Sweden.