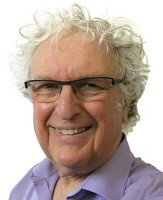 Oskar Weiss was born on 24th January 1944 in Chur, Switzerland. Foreign travel and constant moves from place to place with his family marked his early years. He attended school in Vienna and Berne, and at the age of 18 showed his paintings for the first time in a small exhibition. From 1963 to 1968 he studied graphic design at the Kunstgewerbeschule in Zurich. In 1969, a year after graduating, he started his own studio. The following years saw his metamorphosis from graphic designer to „inventor of images“, as he explored and developed his own style, which contains elements of humour and poetry, overlaid with a touch of satire. In his studio, he created countless works, commissioned by public bodies and private customers from the world of business and the arts. He has produced drawings and cartoons for the media – the first was published by „Nebelspalter“. He also created several murals. The work of Oskar Weiss is exhibited regularly at various art galleries. His books for children and adults have received public acclaim and have been awarded a number of prizes. He has also designed stamps for Liechtenstein and Switzerland. In 2010 Oskar Weiss got the gold medal of „Burgergemeinde Bern“ for his art work. He lives and works in Muri near Berne, Switzerland.