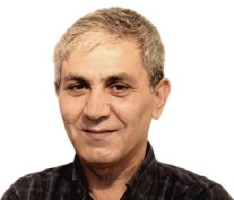 Aziz Yavuzdogan was born in 1958 in Eskisehir, Turkey. He studied Fine Arts at the Gazi University in Ankara, Turkey. He began his career as a visual director and cartoonist in 1981 in the Growing Publication (Gelisim Yayinlari). During a short time he was also a director of a literature forum site and published a magazine Forumedebiyat and FE Dergi. He was also the publication director of TRT’s cartoon educational “Cizgili Program”. After many years of working with newspaper Milliyet Gazetesi Aziz Yavuzdogan retired in 2008. He continues his duty as a secretary of the Turkish Cartoonist Association. Currently he works as a freelance artist concentrated mainly to cartoon, illustration and graphic design. In the 32 years of his career, Aziz Yavuzdogan has designed many books, book covers, catalogs, brochures and magazines. He is the Editor-in-chief of FENAMIZAH e-magazine. His cartoons have been published in numerous humor magazines such as Carsaf, GumGum, Kirpi, etc. He has also participated in many worldwide known competitions such as in Montreal, Canada; Umoristi a Marostica, Italy; and Gabrovo, Bulgaria where his cartoons won awards. In a number of international cartoon competitions, he took place as a jury member. He published several cartoon albums (2004 -”The Good, the Bad, and the Ugly”; 2006 – “Women, men and the others 1 and 2”; 2010 – “How can I draw a cartoon?”; 2011 – “Wordless Things”) and a poem book “Soul and skin” in 2011. Aziz Yavuzdogan now gives cartoon classes and workshops in Istanbul, Turkey.