EVERYTHING IS IN THE LINE 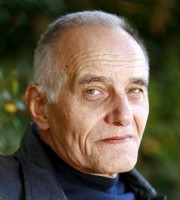 ……When God with his sophisticated aesthetical feeling saw that the people were building the Tower of Babylon he got angry and tangled their tongues so that they could never settle on such stupid and heretic project again. Since then people do not understand each other because they speak different languages even if they use the same language.

……But God is not only strict, he is also gracious and he did not afflected another means of communication between people – the line. This means is not for everybody but gifted individuals can express the thought by several lines in a way it can be understood also by other nations, races and whole generations. The evidence of that are drawings in Altamir Cave in Spain. Even after fifteen thousand years we understand them, even now we know what their author felt and thought of then.

……The drawing which expresion the thought in condensed form by means of several lines and makes us laugh or think we call cartoon. The laugh it brings need not to be loud but easily gets over boundaries between people because cartoon seizes the essence and it is common for us all. On top of it the laughing man is not capable of hate.

……We can say that through cartoon God merrily and conspiratorially wrinkles at us.

(author is a renovned Slovak writer and publicist)