VLADIMIR RENCIN – HUMOR, THAT WARMS US 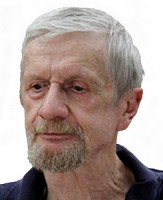 A good cartoon can not be ordinary. And it can not be old. Unlike anecdotes, here it does not apply that the older it is, the better. Neither the author of the cartoons can not be ordinary. However, he may be old. He even must be old.
These words fell here eight years ago when we opened the exhibition of Vladimir Jiranek. And came the punchline: Vladimir Jiranek is good old author of good new jokes. Jiranek is no longer among us, and also the second of the great cartoonists of modern times, Vladimir Rencin, has recently left us.
And also Vladimir Rencin is a good old author of good new jokes. Why do not we say that he was, but do we stick to the claim that he is such an author?
Just look around this beautiful gallery. Rencin is here with us. Today, December 6th, he celebrates his 76th birthday with us, even if he finished his days. We have him here in full harmony, in sufficient quantity … actually in the optimal selection of his artwork, without being supersaturated with his work, or being repleted with his humor.
Jiranek and Rencin were closest one to another in the 1960s, both in person and in work. It would not have happened today, but at the time people were confused saying, “Have you seen the new Jiranek in Mlady svet? … sorry, Rencin. Both were the “new wave” of Czech cartoon humor, more precisely “art journalism”. This term better describes the nature of the work that responded to current events and it was only in the periodical press. None of them had art education, and both had their standards (ideals) in Paris …
Do you know where the inhabitant of Prague Jiranek was born? In Hradec Kralove! And do you know where the dwindling inhabitant of Hradec Kralove Rencin come from? From Pecky (a quarter of Prague). Today they are both in the same space and we – as survivors – are proud to have known them from the beginning that we have swallowed their jokes and that we can browse in their books.
And – like today – we can enjoy Rencin in the original. It is therefore a good idea to thank the family, whose understanding of this exhibition was an essential prerequisite – we could even borrow authentic things from the artist’s work desk for the moment. Thanks! Vladimir Rencin has been enjoying incredible popularity since the 1980s. The number of visitors at that time at the Old Town Hall is insurmountable. Even crowds before the Prague bookstore, where Mirek signed a joke collection. The album was suddenly sold out yet released in quantities which now publishers never dreamed of.
About the author and his work, many have been written, in condensed form you can read the basic facts in the catalog and on the opening panel of the exhibition.
What can not be said in numbers is Mirek’s character, his approach to life, to people. But also to the fish he spent with – just from the shore – so much beloved common silence. And still his approach to wine; but he did not sleep with his glass, rather quietly silent. Also, the silence of the antiquarian bookshop with a book in his hand he loved. At the same time, these places were the environment of his ideas.
Many of us who have worked with Rencin, very interested in how he tackled the publishing at a time when you can draw and write everything. His popularity was connected with the “typical Czech” subsurface criticism that the comrades knew about, but they still did not know what to do with it … At the beginning of normalization they invented it – Rencin had a problem of unauthorized publishing in the western countries and also he could not avoid being visited by Estebaks (Communist secret police). Despite the fact that these were jokes without words for scientific periodicals.
As early as January 1990, it turned out that Rencin’s slightly fury, but in fact non-portrait cartoons, continues to work. Humor built on dialogues or muddling of ordinary Czech figures is still effective – human nature remains. It is timeless. It was valid at the time of its birth, it is valid even after years. Not only it entertains us but also brings pleasure … and warms us.
I believe that it will continue to be valid. Good humor has an advantage over the sharpest satire. And that’s why we are glad to be here with Vladimir Rencin today.

(the author of the article is a renowned Czech journalist, writer, cartoon humor expert, leading theoretician of the Cartoon Art, editor of e-GAG magazine)

* Written for the catalog of the exhibition of “Vladimir Rencin” in the Smecky Gallery in Prague, Czech Republic 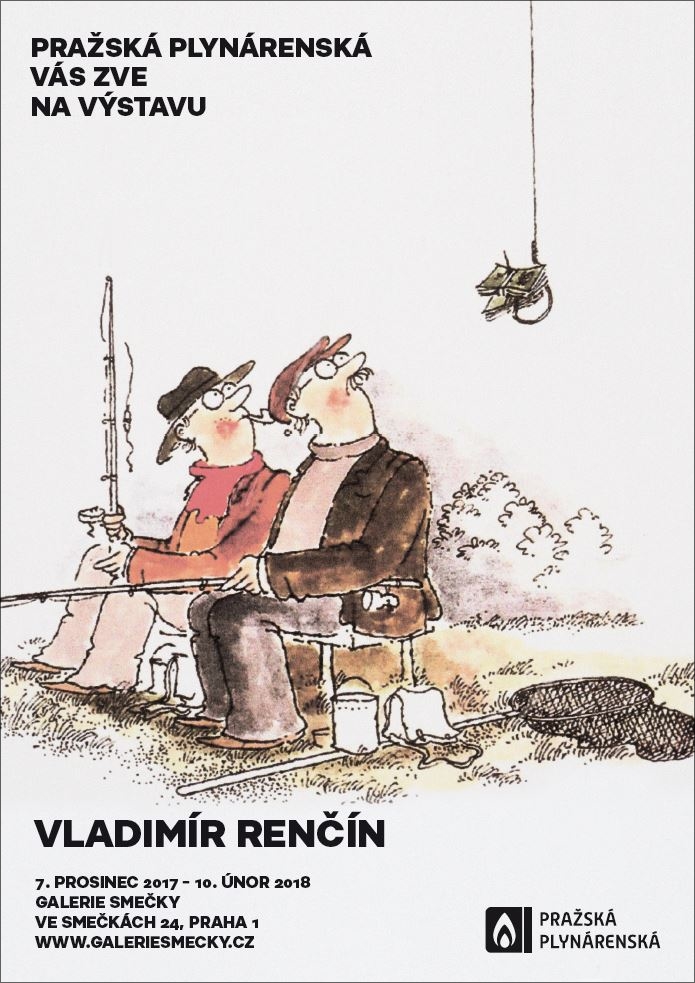 Poster of the exhibition of Vladimir Rencin