For TypoGrafikUm and Cartoon Gallery written by FERO JABLONOVSKY / Slovakia 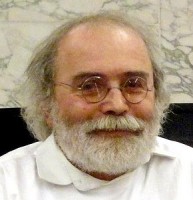 Saul Steinberg was born a few weeks before the beginning of World War I in Ramnicu Sarat, Romania, and died at the end of the twentieth century in New York. An artist who in his work perhaps best saw shine and misery all over the twentieth century. He has never felt himself only artist, he always considered himself a writer who records. More specifically, however, fits to him a label for susceptible philosopher, perhaps a psychologist or psychiatrist. But actually any good writer is also a philosopher, psychologist or psychiatrist.

Saul Steinberg with his artwork

Despite the fact that his works are in prestigious collections and that he had a number of large-scale exhibitions in major galleries, it seems as if his place in the history of art could be found only very hardly. There were contemplating about it several theorists analyzing his work, from considerations of impossibility to jump the gap from cartoons to the recognition of the high arts to more detailed comparison of his work with the work of Honore Daumier and Paul Klee. I think it’s more that the work of Saul Steinberg just does not fit to the category of fine art. It is too multi-semantic, it is really more a record of thinking, it’s not “just” a creative artifact. Paradoxically Steinberg himself best described his own artistic view using the word “writer”.

Rather interesting is that after a short study of philosophy in Bucharest, he graduated from architecture in Milan. His drawings are essentially philosophical floor plans, sections and perspective views of society. Their depth is also in the fact that he survived them – his departure from Romania and from fascist Italy was due to save his own life. He recalled Romania with bitterness – Jews were unworthy of civil rights, “even the dogs looked at us reproachfully” he used to say, maybe not as a joke. Italy meant for him Paradise, according to the name of his later autobiographical drawing which records that period. 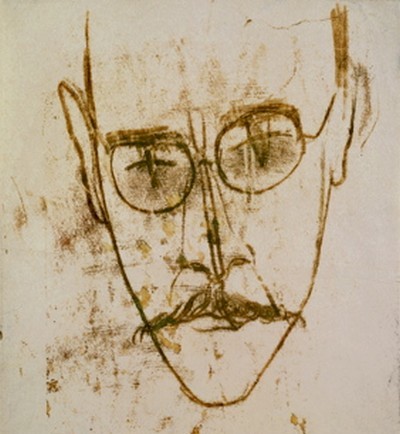 The paradise insisted, however very briefly, he failed to get into the quota of possibly Romanian emigrants to the USA, and after very complicated odyssey, spending a year in the camp in the Dominican Republic and out of warranty of the New Yorker magazine, he managed to get into the United States. Thus such was the beginning of their collaboration that lasted until the end of his life and brought not only almost ninety cover pages, as well as hundreds of drawings. Certainly the most famous cover “View of the World from 9th Avenue”, which, however, he did not like, complaining that he is known only as “the man who made the poster”. This drawing is so popular that not only American cities but also many world ones have their own imitations, its own view of the world, whether it’s Toronto, London, Amsterdam, Beijing or even Jerusalem. 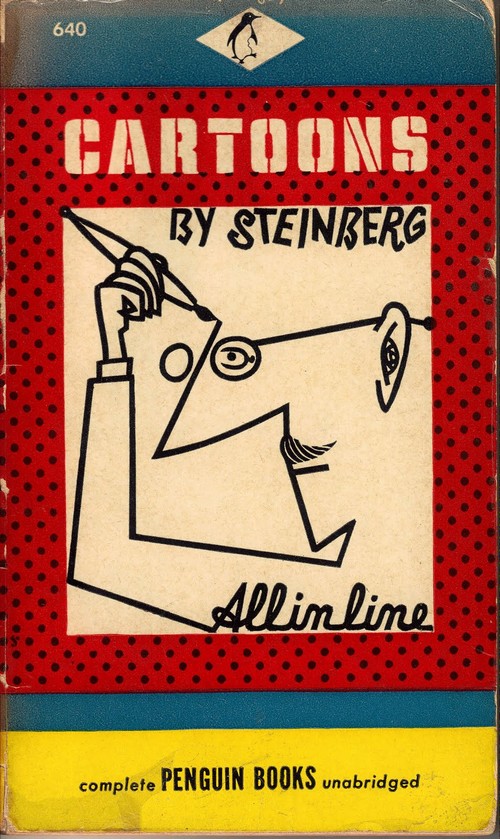 Saul Steinberg: All In Line (one of the early paperback editions)

Worldwide fame has brought to Steinberg the book “All in line”, which was published in 1945. It contained a simple line drawings, often in one stroke. This kind of artwork influenced fundamentally the whole world of cartoons, in the sixties was even talked about Steinberg‘s stream in the cartooning. Unfortunately, the vast majority of cartoonists were seduced by the simplicity of drawings and there arose a flood of variations created by “pictomans” as called them Vlasta Zabransky (famous Czech cartoonist), who was in his early days also indelibly affected by Steinberg.

Although the basis of Steinberg’s artistic expression is drawing, he created a number of watercolors, works with his own stamps, he made collages, assemblages and masks for specific people. Even on the cover of his biography is his photo in a mask, which caught him more than an ordinary portrait. 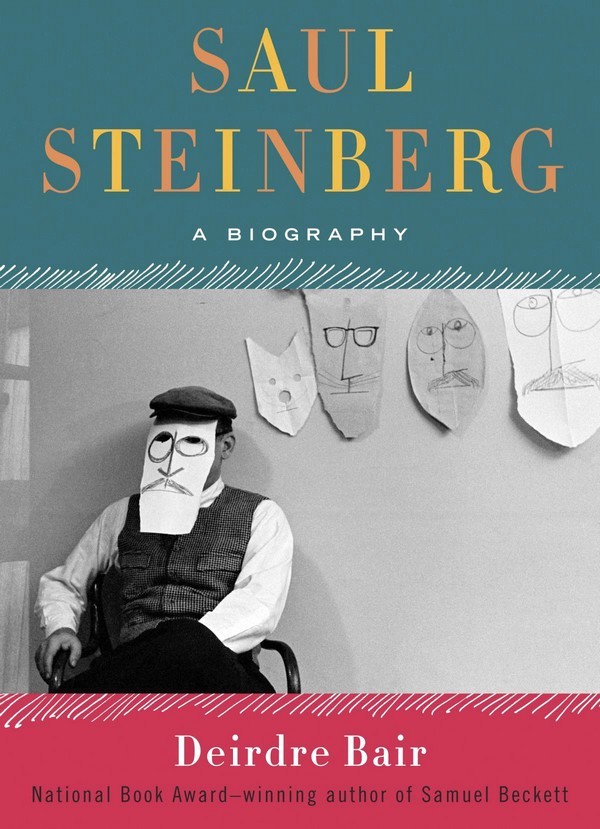 Those who knew him called him an elegant dandy who entertained people at parties with spicy erudition and wit. But behind thick glasses was a mask that hid his dark, perhaps even depressive side.

When viewing images of his book Passport in which different dolls struggle with often very dynamic and ornamental signatures, there impact them various stamps and their dream is the correct certificate – if you compare them with the actual reproduction of Steinberg’s passport, you will realize that in those drawings is going indeed of life. And one of the ways of survival is the right mask, the correct orientation in the arts of life and its labyrinths in contact with the ubiquitous inspectors (such are also the names of some of his books).

Covers of some books of Saul Steinberg

Some additional notes on the impact of Steinberg’s art to our (ie Slovak and Czech) culture: In 1959 came out a book selection of drawings collected by Milos Macourek (well-known Czech poet, playwright, prose writer of fairy tales, screenwriter and director), in 1965 chose Kornel Foldvari (well-known Slovak theorist of humor, writer and publicist) to the magazine “Kulturny zivot” (Cultural life) a cycle of letristic portraits of celebrities; with Steinberg’s drawings could regularly meet the readers of the magazine „100+1 foreign curiosities” or sporadically in other journals. With the influence of Steinberg had to cope the whole community of cartoonists; but the work of Steinberg admired, for example, also Suchy and Slitr (famous Czech entertainers). The text by Suchy „Small kitten sleeping in a shoe” was said to be directly inspired by Steinberg‘s art of abbreviations, and Slitr was even several times in the Steinberg‘s apartment where he admired among others a common Steinberg‘s drawing which he created with Picasso so that they rolled up a piece of paper into small strips and the first of them drew a line. He covered it so that it protrudes from it just outside, to which the other one soon followed by other lines. Both drew only a single image, without knowing what it’s going to be. Slitr had then in New York his exhibition which Steinberg visited; they devoted each other their drawings; Slitr always liked very much to boast with the drawing from Steinberg.

Great admirer of the mastery of Steinberg‘s artistic abbreviation, without which he can not even imagine a cartoon of the twentieth century, and whose name he always pronounces with great respect is Miroslav Cipar (great Slovak painter and graphic artist), a knight of drawing, as marked him Fedor Kriska (Slovak art theorist).

And at the very end Steinberg’s last words. They were funny and deep. “I’m dying”, he said, “I feel it, but what have I to die?”