WITH THE THEORIST OF GRAPHIC HUMOR I. HANOUSEK

ABOUT GRAPHIC HUMOR (written a quarter century ago plus 1 year)

As a so-called “Interview on the 24th page” was published in Bratislava weekly “Selection from the World and Czechoslovak press” on the 1st October 1987 in the number 40 (edition XX., price of CSK 1.50) this article.

As stated Vaclav Teichmann in the introduction of an interview for the monthly “MAGAZIN CO VAS ZAJIMA” (MAGAZINE WHAT ARE YOU INTERESTED IN): “Ivan H a n o u s e k is one of our few theorists of cartoons (…). In the sixties, he was at the birth of new directions in our graphic humor, he formulated the opinions and influenced our leading cartoonists who started their career at that time.” 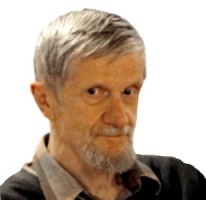 Currently forty-five years old man [Photo: I. Hanousek today (71)] worked for thirteen years as an editor of the sports weekly STADION. Although his journalistic career began on the pages devoted to culture; in STADION where he is over ten years responsible for humor, as he says “they have there better idea about features and capabilities of cartoons than elsewhere.” In 1983, he founded the first and only competition in Czechoslovakia for the best cartoon with a sports theme. Ivan Hanousek has been in his life accompanied by graphic humor since his studies at Karlova University, where he graduated with the thesis about “Graphic humor in the Czech press.” The past year he became independent; he writes books, reviews and theoretical studies and contributes to a number of magazines.

Magazin CO VAS ZAJIMA (Magazine WHAT ARE YOU INTERESTED IN): Why is the theory of cartoons rather your hobby than a profession?

IVAN HANOUSEK: This is closely related to the marginal position of cartoons among the artistic and newspaper genres. It was that ancient thesis where I tried, probably as the first in our country, lay the theoretical foundations of cartooning as a distinct genre, a sort of “visual journalism”. Since then remained there surprisingly still valid especially those specific things that I had revealed then. Very simply said, the cartoon in the newspapers is only Cinderella, and there should come prince who would lead her to where she belongs.

MCVZ: So, for those two decades, nothing has changed.

HANOUSEK: In the graphic humor has happened quite a lot – and in a positive way. They started to organize exhibitions of cartoonists with a stunning number of visitors. To the best cartoonists began to come out books of jokes in mammouth amounts. Humoristic drawers got the opportunity to illustrate books and make advertising, to create animated films and TV fairy tales. Even the titles of meritorious artists have emerged. But it is not so good as it was in my thesis. The most intrinsic for cartoons is the daily contact with the reader or viewer. Thus their position in our media. It is well known that the cartoons have a number of advantages in comparison with the printed word – they are attractive, more robust, and therefore they are more revealing and effective. And they are much more usable than it would seem. To prove it, I had created a kind of test newspaper, where there were “speaking” only cartoons and caricatures. It worked. From the first page to the last. It was just an extreme example that everything can be not only said, but also drawn – and even with the punchline. In practice, however, it would be enough if the drawings were in the newspapers at least where they exactly would “fit”. If they have the appropriate content and quality. If they were original. And if they were provided with the correct names of the authors. But in this way the editorial staff (with only few exceptions) still didn’t know to work with the cartoons and caricature.

MCVZ: What is the main cause?

HANOUSEK: It is a sensitive area, but I have to say that. In our country – so to speak – everybody “understands” humor, but in editorial offices are still missing experts who understand directly to this separate genre. Jokes are commonly selected by graphic editors of Saturday annexes, secretaries, etc. For example, an artist assess in particular a drawing level – but where is the guarantee that he has a sense of humor? The relevant editors are definitely funny guys, they are able to tell an anecdote, but how can they know which joke was old or which one was traced from a foreign magazine when they deal with this genre only marginally and no one was taught of that? Cautious editors would prefer to collect proven scraps fallen from the table of “DIKOBRAZ”, sometimes they reach for sure only the best names, and if came to them the prospective Jean Effel with his early drawings, he had no chance. I don’t want to omit someone, but in Prague, excluding “MLADY SVET” where they are traditionally active in this role, and where selects the cartoons a leading cartoonist (and now for a long time also academic painter Stanislav H o l y) and “SVOBODNE SLOVO”, in which selects erudite jokes Ondrej S u ch y; it is elsewhere the matter of chance or intuition. This is not the fault of specific people or editors, but a result of a total lack of any training in this area. And this absence is due to underestimation and misunderstanding of the possibilities of the genre. Specifically, for instance at the Faculty of Journalism should be at least a seminar devoted to this area, so as at the Academy of Applied Arts they should teach cartoon …

MCVZ: What is exactly doing an editor who is responsible for graphic humor?

HANOUSEK:: He doesn’t care only about cartoons, but also about the cartoonists. He has to cooperate with them in a certain way. He must be able to prove distinguish those who draw “themselves” or “from themselves” from those who only invent the jokes. Personally, I mostly appreciate the role of a “Scout” as it is called by Canadian hockey players, i.e. the talent hunter. I hope Mirek B a r t a k will not be angry at me, but he was the first one whom I found. I saw his third or fourth drawing in the press and I was immediately in his apartment. The first two or three years, when he returned from the sea to the mainland, we were fully employing him in editorial office of the magazine “PIONYRSKE STEZKY”. Very soon he “drew himself up” and now he belongs among the world leaders. As the last of my discoveries I could mention Rudolf D u b s k y and Bretislav K o v a r i k, whose artworks we printed in the magazine STADION from the beginning. And we were not wrong.

MCVZ: Are you still laughing at the cartoons?

HANOUSEK: Mostly I laugh at them inside, outside it certainly can not be seen – at the good ones, of course. I love jokes by B a r t a k and other good authors of wordless humor and I appreciate them at most, but I laugh out loud just at R e n c i n’s and P a l k a’s jokes.

MCVZ: I know that you published thousands of articles, especially profiles of foreign authors with examples of their work. You have perhaps library of thousands of books and catalogs of drawn laughter. You can surely say what is the status of our cartoons in the world?

HANOUSEK: Despite of some pessimistic views our humor is world class – evidence of that are not only numerous awards from the international competitions and festivals. The fact is that B a r t a k, R e n c i n, Z a b r a n s k y, J i r a n e k, S l i v a, M a t u s k a and others are part of the European cultural consciousness in this genre. P a l k a with V y c i t a l are world-class even in their untranslatable “Czechness”. And I’m even not talking about N e p r a k t a nor the others, such as B o r n, who already left the classic cartoons. So we would understand one another: I’m talking about regular newspapers’ especially black and white drawings. Where the world is heading in terms of art techniques, formats and colors, there we cannot to go yet because of prosaic reasons: we don’t have so equipped printers. It is often said that the young don’t show much yet, and it’s true. But we cannot expect that there will be right now repeated such a talent explosion that occurred during the start of my peers.

MCVZ: What would you wish to our graphic humor?

HANOUSEK: In addition to what has already been said here, perhaps that the same thing would happen again as that from the 6th June 1938. At the same time, even though far apart, were born Miroslav B a r t a k and Vladimir J i r a n e k. A few of such days might still need our graphic humor, don’t you think so?

Magazin CO VAS ZAJIMA (Magazine WHAT ARE YOU INTERESTED IN)

– At that time was completely different period; even already – thankfully – there was at least perestroika “glasnost”;

– V.T. wrote the interview for the monthly magazine, whose editor was publishing house of the CPC Central Committee;

– I graduated with my thesis with excellent result – and my opponent was Vladimir Jiranek;

– The extreme magazine without words and with only drawings was created in three years but in a somewhat different version (enforced by publisher and printer) – it was called “KUK”;

– It is noteworthy that in terms of selection of jokes it is even worse today;

– While the “beginners” Bartak and Kovarik later became (eg) the chairmen of Czech Union of Cartoonists, Rudolf Dubsky died of cancer.