.
YURI KOSOBUKIN
REPRESENTATIVE EXHIBITION OF THE MOST SUCCESSFUL CARTOONIST OF THE WORLD 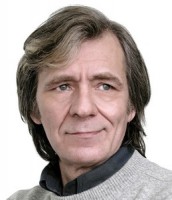 Evaluate something so multiform and difficult to grasp as art is the task almost insoluble (although we can find many people who are feeling to be involved to it). However, we may also find an objective criterion, which still does not have to indicate quality automatically but certainly has a high explanatory power. If we have adopted such a measurable criterion as amount of success at prestigious international competitions, then we may say without any doubt that the creative work of Ukrainian cartoonist Yuri Kosobukin (1950) has no parallel in the whole wide world.

His success is so impressive that the person stops breathing. Just imagine: If we only wanted to appoint very briefly individual awards which he had won and for every single prize we reserve only one single line of written text – the list of his awards would fill nearly eight densely described A4 pages. Let us say that incredible number – Yuri Kosobukin won more than 450 prestigious prizes at international cartoon competitions all around the world (and while writing this text certainly were added several others). And even a quarter of them (i.e. more than 100) were the first and grand prizes (Grand Prix). Thanks to his distinctive and unmistakable handwriting we can recognize his works already from a long distance. His artworks have been exhibited in so many countries of the world, that it would be much easier to designate the countries where they have not been exhibited. Countless periodicals worldwide have been decorated by thousands of his drawings. So this would have certainly been a good reason for hypertrophied self-confidence – but the opposite is true – Yuri Kosobukin remained so, as he was before – modest, industrious, wise and friendly man.

And we may say that Yuri Kosobukin became an artist just “on the second plan” – he studied aeronautical engineering at the Kharkov Aviation Institute and then worked as an engineer in the Aircraft Design Centre in Kiev. However, quite often happens that even the people with an exact education and scientific backround often tend to artistic disciplines. Perhaps this is because they are able to perceive relations invisible by other people. They probably know how to dismantle human personality to components and analyze the principles of their operation. And if there is added a huge talent, we can definitely expect extraordinary works of art.

Accept please our invitation to the exceptional exposition of artworks of the most successful cartoonist of the world – exclusively for you – Yuri Kosobukin and his creative work.